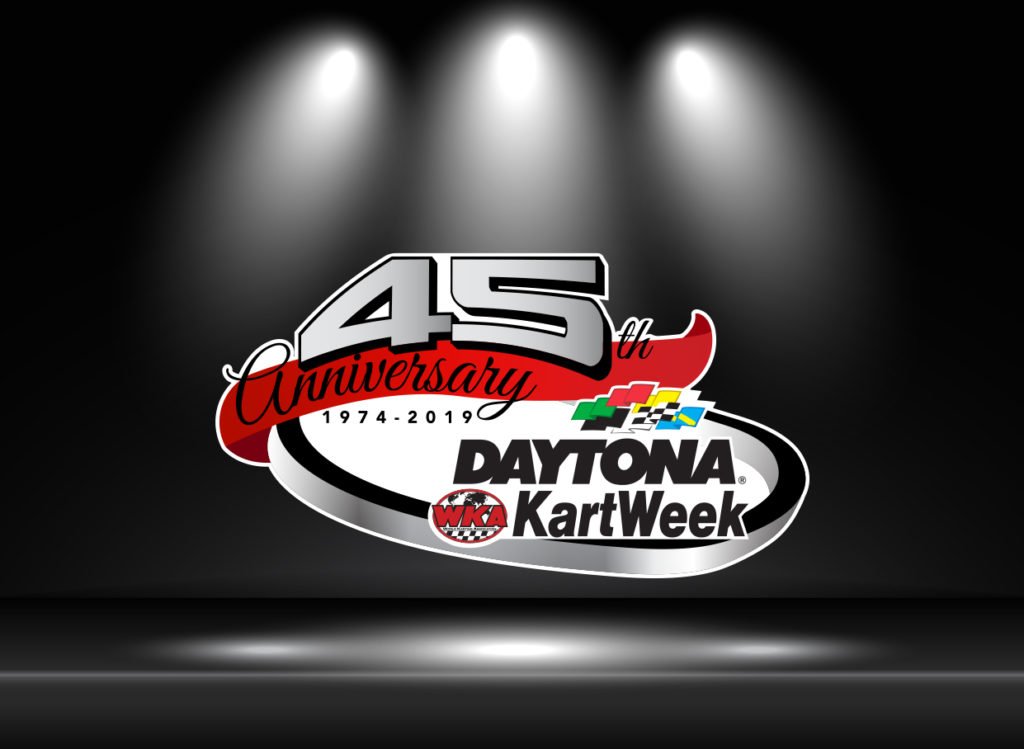 The week after Christmas many families are traveling back home after the holidays but for go kart racers home is Daytona International Speedway. This year the World Karting Association celebrated its 45th year racing at the legendary track. Many of the racers today still remember the 1st race that was held at Daytona in 1974. There are also quite a few go karters that can say that they have never missed a year racing here which adds up to a lot of miles traveled. From grizzly granddads to little kids, every age group will compete for the bragging rights of the 1st place trophy from Daytona International Speedway. 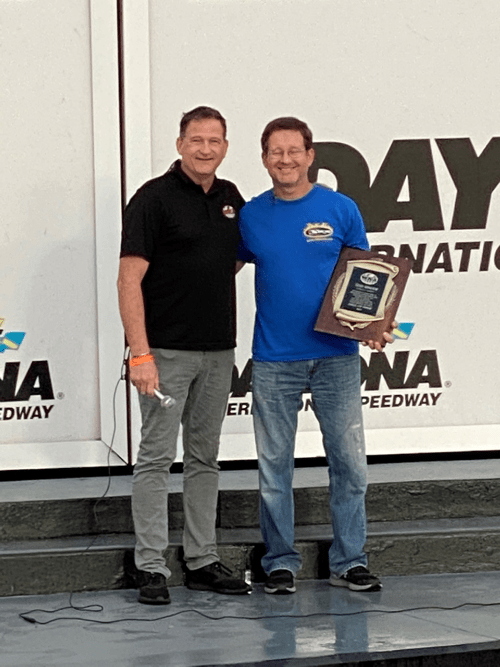 This year we added another awesome racer and supporter of sport to the WKA Hall of Fame. Tod Spaude was presented with the plaque at this years event adding his name to a long list of legendary racers including his father, Bill Spaude. Tod is the owner of TS Racing, which has been a long-time supporter of the Road Race Series. Congratulations Tod!!

With rain in the forecast for Daytona Kart Week, many were hoping that it would blow over and leave nothing but clear skies for the days ahead. Unfortunately, that was not what mother nature had up her sleeves. Move in day started out with sunny skies but as the afternoon drew near the heavens opened up and created undesirable track conditions. When practice day rolled around many were hoping that the track would dry out enough to make a few laps but again mother nature had different plans, which only allowed for a few rounds of practice. Sunday also had rain in the forecast but again many were hoping that it would dissipate and allow the racers some practice time and allow the race schedule to start. Sadly the first race which was the Cadet LO206 and Jr. LO206 class was the only one that was able to race that day. By mid-afternoon race officials made the decision that the track was not going to be suitable for racing and officially called it a rain day.

By Monday many were itching to get out on the track and were hoping that the racing gods would be smiling down on them and as luck would have it, they were. Race officials were able to get in quite a bit of practice before having to start the races. They also decide that they needed to shorten all the races to ensure that they finished due to possible rain in the afternoon. The 30-minute races would be shortened to 15 minutes and the 45-minute races would be shortened to 25 minutes.

The first race of the day brought out 30+ racers to the grid. The Stock Honda class came out with an impressive 15 racers. With the class filled with a ton of veteran racers it was bound to be an exciting race. With the shortened race many had to change their strategy as they wouldn’t have as long to make their moves. Steven Rougeou who is no stranger to the checkered flag found himself in 5th place at the start of the race and this ensued for most of it. It wasn’t until the last lap that he decided it was now or never. He took the position in the infield and then drafted around Cole Peschang rather than be behind him down the back straight. This allowed him to gain the draft from the 1st and 2nd kart while still having a drafting partner to my rear. The head wind on the front straight let his gearing choice take advantage for a pass around the leaders. 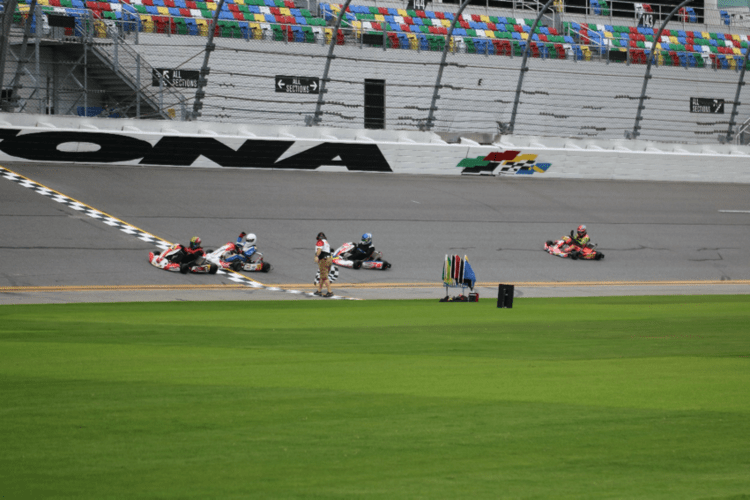 “I was powered by SRS Engines who has given me 3 wins at Daytona. Great support from my family; my father Bo Rougeou, my wife and mother for helping to make this year’s trip possible. A thank you to WKA and all my competitors; the Daytona win wouldn’t be as special if it weren’t for the high esteem given to it by everyone. This win is for my daughter Katherine.”

The 3rd race which included the Yamaha Senior class had over 20+ racers ready to fight for the checkered flag. This race brought out a lot of veteran racers, with a few of them having attended the 1st Kart Week here in Daytona. One name that is resonates within the karting family is Fulks, who were one of the ones to attend the inaugural race. Many know the man that started it all, Reggie Fulks who then passed down his love of karting to his sons Randy and Rick. Coming off the 1st lap of the race, Rick Fulks led the Yamaha Senior class but by the 3rd lap Brad Zoeller had taken the lead but it was short lived as Randy Fulks made a pass on the infield road course to take the lead away. Around the halfway point, Rick Fulks once again took the lead and pulled way from the group with Randy Fulks, Keith Freber and Brad Zoeller vying for 2nd place. Keith Freber then took advantage of a mishap and led the group a lap or took but it was short lived as Rick once again took the lead. On the last lap Randy made a move in the west horseshoe to pass Rick who continued to draft behind him. Randy took the checkered flag with Rick 2nd and Brad Zoeller finishing 3rd. 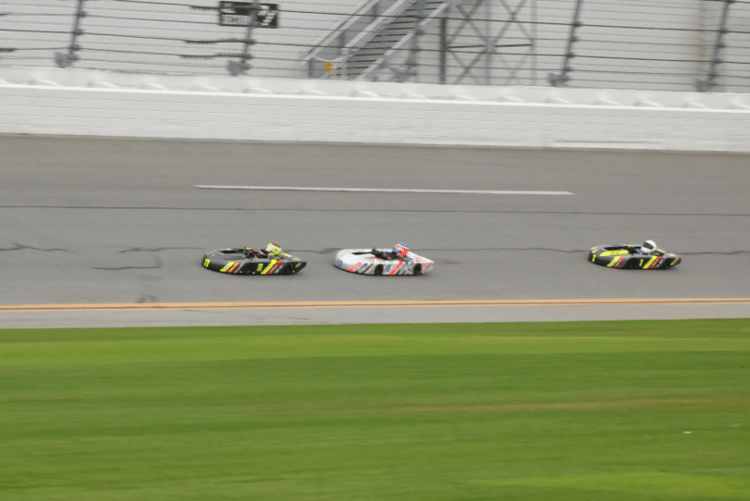 The IAME Sprint race brought almost 30 racers to the grid. With this many racers there was bound to be some good ole fashion racing. But with the race shortened to only 15 minutes many were going to have to make their moves sooner rather than later. Starting in the back were the Brown brothers along with the Cherry’s which made for an interesting start because quite a few of them got tangled up and put them in the back of the pack. After a few laps the Browns and the Cherry’s were back in the game shortening the distance between them and the lead pack. By the last lap the lead pack consisted of the Cherry’s, Brown’s, Jason Lorang and Alex Mayer, but who would have the right moves to take the checkered flag. Coming down the straight away from NASCAR Turn 4 Scott Cherry ended up passing Matthew Cherry with Jamey Brown drafting right on his tail. As they neared the checkered flag Jamey tried to make the pass at the last minute but came up short and Scott Cherry taking 1st place.

Race 5 in the Unlimited class also brought out 20+ drivers ready to take on the Daytona high banks. Right at the drop of the green flag Johnny West took the lead and never looked. Following close behind was Denver Liabenow, who did happen to have the fast lap time for the Unlimited race, but unfortunately it wasn’t ever enough to take the lead from Johnny. Again, with a shortened race many racers did not have enough time to formulate a strategy to pass the leader. In the end Johnny West took home the 1st place trophy with Denver Liabenow coming in a close 2nd. Brian Wilhelm took home a 3rd place finish but ended up with the top speed for the weekend at 159mph. 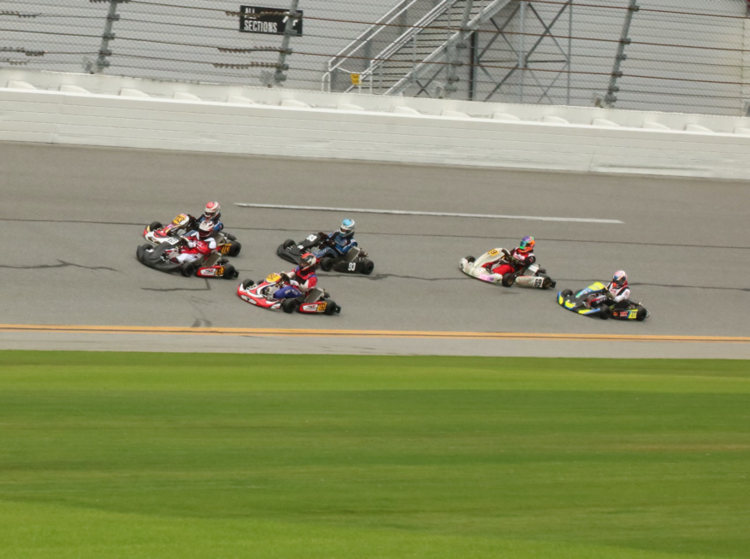 “Many of the racers were a bit disappointed when the weather reports came out with scattered showers for the next three days. The World Karting Association did a great job manipulating the time so that on the final day we were able to squeeze in practice and also get in all the races” says Johnny West.

The last race of the day included the CIK LO206 Sprint class which brought a whooping 41 karts and the TaG Heavy class which had 25 karts. Along with the other few classes that were apart of race 7 a total of 90 karts were gridded and ready to take home the 1st place Daytona Cup. Right out of the gate Richard Hoff came down the front straight away on the first lap in 1st place with Kyle Banovetz and Jeremy Yancey hot on his trail. Unfortunately, this race was cut even shorter than the 15 minutes due to a red flag that happened coming into the infield of the road course. With only 2 laps being made the finishing order was determined by the position of the driver at the time of the red flag. Richard Hoff was able to snag the 1st place finish and took home the coveted Daytona Cup trophy.

The TaG Heavy race was also a packed race with a lot of familiar face. Paige Evans started towards the very back of the grid and when the green flag dropped, she took off like a rocket. From the start of the grid to turn one she had managed to make her way through 10 drivers weaving in and out of the chaos. Going through the infield she continued to make her way through the rest of the pack. 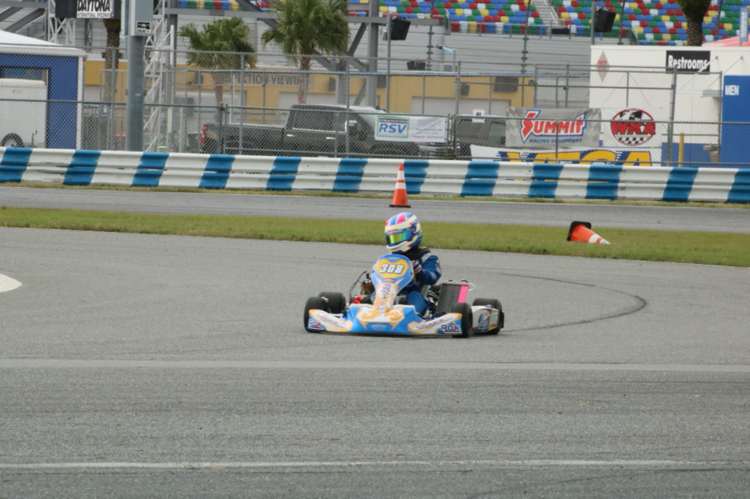 According to Paige, “I got onto the oval and was in disbelief of how quick my Praga Dragon Evo kart really was, the Rok GP that was powered by Swedetech was just screaming and passing the other drivers like they were stopped.”

As she gained on the leaders her next move would be crucial, tuck in and draft or take the high side and pass but as luck would have it, she took the high side and took a hold of the 1st place position. In one lap Paige had gone from 23rd to 1st without any hesitation. Regrettably a red flag was thrown and cut the race to only 2 laps.

“Knowing I had secured the victory gave me so much joy, in the scale line I got to my dad who is also my mechanic and my biggest supporter who engulfed me in a massive hug. All of the hard-work this year had finally paid off and thank you to all of my teammates for the endless support, I could never do it without you guys!

Again, a big thank you to the racers that came out and braved the weather at the 45th running of Kart Week at Daytona International Speedway. Hope to see everyone at the next stop on the Vega Road Race Series, Roebling Road.