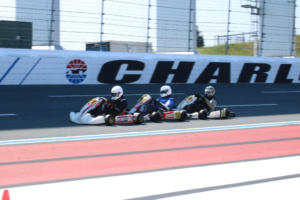 After having to cancel the initial date in April due to this ugly monster called Covid-19, the Vega Road Race series made its way back to Charlotte over the Fourth of July weekend for the 2nd annual Charlotte Karting Challenge.  This time not only would the racers have to take on the giant oval of Charlotte, they would also have to contend with having the entire Roval layout. This consists of 13 twists and turns and is part of the 2.4-mile road course incorporating part of the infield and all but 400 feet of Charlotte’s iconic 1.5-mile oval.   Many had not run the entire Roval in years but this year WKA had an ace up their sleeve by adding in a night practice under the bright lights of the speedway.  Many wondered if they would be able to conquer the Roval under the cover of night and still be ready for the soaring temperatures the weekend would bring.

The weekend started off with a bang not only with fireworks but with the CIK LO206 Sprint class.  They brought out an impressive 25 racers for the first race of the day.  Coming down the straightway leading the first lap was Jeremy Yancy with Gary Campbell hot on his trail.  These two held onto the lead until around lap 3 when Jame Russell, Doug Rink and Chad Chandler used the power of the draft to overtake the lead pack.  Jame Russell led the pack of three for the majority of the race, fortunately Chad Chandler had the power and took the lead to take home a first-place win on Saturday.

“This was my first WKA event and road race at that, but our team was dominant all weekend. I hooked up on the Rink and Russel train and we drove straight to the front. Very fun weekend of racing,” says Chad. 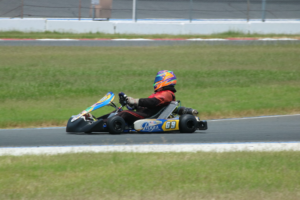 Sunday’s race also was once again dominated by the group of three that consisted of Russell, Chandler, and Rink but not without a lot of teamwork.  With Jeremy Yancy taking an early lead again with the help of John Morris the boys would have to make good use of drafting to gain the speed needed to catch the leaders.  As they were catching the lead pack, they were almost knocked out in the infield Roval. After falling back about 10 seconds from first place, the three-pack turned some of the fastest times of the weekend for this class at 2:24.588. After a lot of work, they managed to catch the front two karts again going down the back straight on last lap.   Sadly, it was not a 1,2,3 finish again due to a Jr. lap kart getting in between Chad going into the last corner.

The TaG Heavy class was dominated by one person the whole weekend and that person was Jason Lorang.  On Saturday when the green flag dropped, Jason took off and never looked back.  He concentrated on being consistent on each lap which allowed him to break away from the other racers.   He kept this pace the entire race and took the checkered flag with a 20 second lead over second place, Matt Turner.  With temperatures soaring on Sunday, Jason was able to find even more speed than on Saturday.  Again, when the green flag waved Jason controlled the field in the TaG Heavy class.  With even more speed that got him down into the 2:03’s, he broke away from the pack even earlier and kept that pace for the duration of the race.  He ended up lapping the entire field within the 30 minutes to bring home another first place trophy.

According to Jason, “You have to look at Charlotte as two separate tracks, the oval, and a giant sprint track all connected together.  Being fast at the Roval requires balance on the kart and hustling the infield pretty hard. Overall, it was a great weekend and a great few weeks of racing coming off of Mid-Ohio! Next year hopefully we can do April and kill some of that heat!” 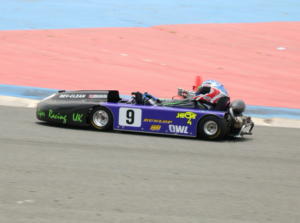 Another exciting class to watch was the Unlimited class.  The speed they brought to Charlotte was impressive.  Saturday’s race was a battle of wills between Brian Wilhelm and Todd Brown.  With Brian Wilhelm in the lead, Todd Brown stayed on his tail catching him in the last two turns before the oval on every lap. Todd passed Brian at about the halfway point in the race, but Brian was able to get back by Todd going into the infield. They had a great race to the finish with Todd gaining on Brian in the infield, but the Owl had the advantage on the oval and Todd just couldn’t make it happen when the checkered flag was thrown.

“I would like to thank Ian Harrison and Viper Racing UK, Hegar 4 Products, Rev-Clean Racing Castor, and Owl Chassis.  I also want to thank WKA, Kevin Williams, Robby Harper, Summit Racing, Charlotte Motor Speedway and everyone else involved in putting on this event. Everything went like clockwork and everyone made the racers feel welcome. It was a blast!”

Sunday’s race again was a battle with impressive lap times and speed.  This time Todd Brown was looking for the 1st place trophy.  With the weather pretty similar to Saturday the only thing Todd decided to change was the gear, hoping it would give him the edge he needed to push pass the pack.  As the green flag dropped, Todd hit the track with vengeance. Paul Gatto, Brian Wilhelm and Dusty Dean controlled the top-three positions for the first part of the race. Todd Brown had lady luck on his side as he was able to get pass Brain Wilhelm and Dusty Dean.  This put Todd in second when Paul lost his rear cylinder and allowed Todd to take control of first, while Robby Harper and Brian Wilhelm battled for second place.  Todd Brown was able to hang on and secure the first place finish beating out Robby Harper by more than 30 seconds.

According to Todd, “After Paul’s kart failure I was running scared thinking I was in first for the first time in Unlimited, thankfully I was able to keep it together and take P1 without a failure.” 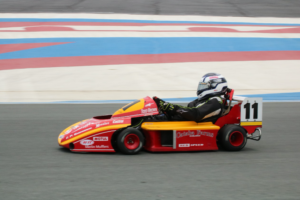 The Yamaha Senior class was another fun class to watch as they climbed the high banks of the oval at Charlotte Motor Speedway.  Coming onto the first lap of the race Scott Griener was leading the way with Jason Lorang hot on his tail. Rusty Benson was a close third and Brian Ellis rounding out the top-four.  Scott continued to lead the charge until the halfway point when there were issues with the kart.  By that point Brian Ellis and Jason Lorang had both pulled in leaving Rusty Benson in the first place position.  Unfortunately, Rusty pushed his kart a little too hard thinking second place William Anderson was in hot pursuit, which delivered disastrous results for Rusty, a blown piston.  This allowed William Anderson to take the checkered flag with Lyle Trudell coming in second.

Sunday’s Yamaha Heavy race brought back the same players all hoping for better results.  Again, watching these racers take on the high banks is quite a sight to see especially as they battle for the top position.  Right out of the gate Scott Griener took the lead with Brian Ellis and Rusty Benson close behind.  Patrick Olsen and Jason Lorang brough up the rear of the pack as they jockeyed for position.  Sadly, Patrick didn’t last long as he was out by lap three.  The battle continued with Griener, Ellis, and Lorang.  Lucky for Brian, an error by Scott Griener caused him to run off the track in the chicane allowed Brian to take over the first place position which he held onto until the checkered flag.

“The track was tricky to get down setup wise as the infield was really tight and technical and then you had the oval you had to gear for as well,” Brian stated. “It was a great experience to be able to race at another premier facility.  Can’t wait to come back next year.” 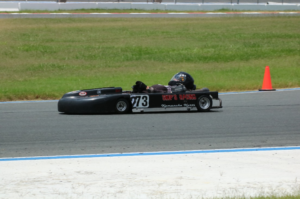 Last but not least the Animal Sprint 390 class was also a great class to watch as the time between first and second each day was less than four seconds.  Saturday’s race was hot and humid, but the racers were determined to make it through to take home bragging rights of first place.  Coming onto the straightway of the first lap Jody Powell was leading the Animal Sprint class with Robert Garland and Jordan Johnson running a close second and third. By the time they hit the road course again Jordan had made his way into second place.  This was where he had to make a choice on whether to be a leader or a follower and he chose to lead the pack.  Jordan Johnson held on to the lead over Jody Powell with a difference of just four seconds.

“I was behind first and I thought to myself, alright I can play with him for 25 minutes or I can try to pass him in the road course and make a gap between us there,” stated Jordan.  “I chose making a gap in the road course so after the tight section in the road course the first place kart started bouncing through the turn and I said ‘now is my chance to take it.’ From then on I never looked back and took the checkered in first.”

After losing on Saturday, Jody Powell was looking for redemption in Sunday’s Animal Sprint 390 race.  Leading the charge on the first few laps was Saturday’s winner, Jordan Johnson followed by Ben Thomason and Jody Powell.  Coming into the third turn of the Roval, Jordan took the turn a little to wide which allowed Ben Thomason to take the lead, but by lap six Ben had dropped out of the race.  This put Jordan in the first place position followed by Jody Powell. Jordan and Jody took turns leading right up until the last lap.  As the two karters came around for the last lap of the race Jody Powell was leading the charge through the chicane taking the checkered flag. 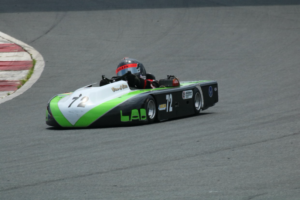 Thank you everyone who made the trip to the Charlotte Karting Challenge.  Hope to see everyone at the next stop on the Vega Road Race series which is at Heartland Park in Topeka, Kansas.

Congratulations to all winners: 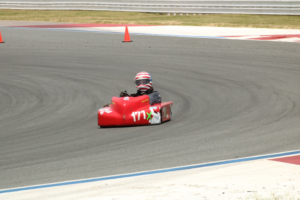 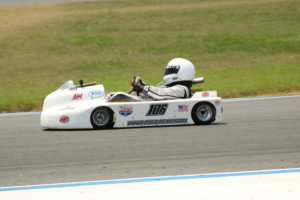 Words by: Jennifer Henry
Photos by: Fade to Black Photography