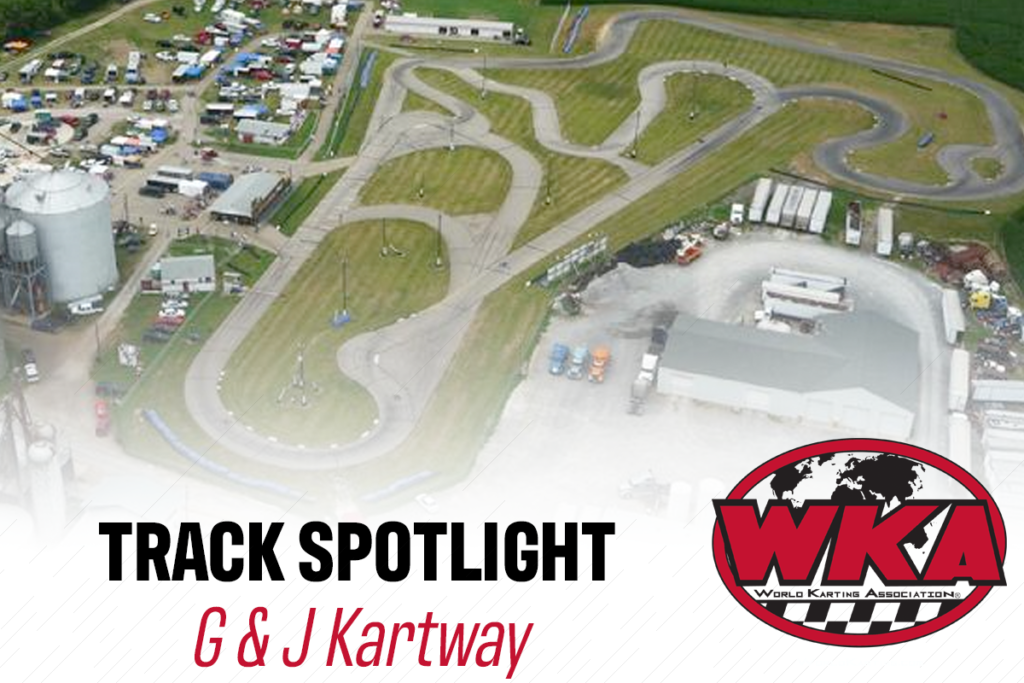 Located among the cornfields and pastures of Southwestern Ohio lies a WKA Master Track known as G & J Kartway. The track entrance is marked by the silos used by Barnets Inc. which is owned and operated by track owner Gary Gregg.

In 1968, the track was expanded to its current 1/2-mile, 9-turn configuration. For many years the distinguishing feature of G & J was the Monza-style turn at the end of the back straight-away. This high-banked left-hand corner was removed in 1973.

Located in rural Preble County, the track is within 60 miles of Dayton and Cincinnati and less than two hours from Columbus, Ohio, drawing karters primarily from Ohio, Indiana and Kentucky. The track is home of Ohio Valley Karting Association (OVKA), a 200+ member kart racing club.

The track has hosted events for the World Karting Association, Great Lakes Sprint Series, former Ohio Sprint Series and SKUSA, in addition to numerous driving schools and non-karting events. The WKA Gold Cup held in July of 2004 saw in excess of 400 participants, one of the largest summer national events for this series and the largest G & J has hosted.

G & J Kartway has had a rich history of participation in the preparation of many nationally known drivers. Tom Cruise participated in a driving school at G & J Kartway in preparation for his role as Cole Trickle in Days of Thunder.

Notable Drivers that have raced or practiced at G & J Kartway, Camden, OH since 1958:

2020 Schedule: Combined OVKA/G&J 2020 Schedule is available to view at http://www.gandjkartway.com/schedulehotels.html

Normal Hours of Operation: In addition to hosting many races this season, G & J Kartway is open for practice throughout the year, weather permitting. The practice fee is $10.00 for unlimited track time, one of the best values in karting. So, if you’re in Southwest Ohio and looking for a great track, make your way to Camden, Ohio and look for the silos…there is a true gem of a track waiting for you. Directions and schedules can be found at ovka.com and at gandjkartway.com.

A message from OVKA President/Vice President:

On behalf of Ohio Valley Karting Association we would like to say thank you to World Karting Association for all you do for the sport of kart racing and racing community during this difficult time. Like many of you we at OVKA cannot wait to get back on track. We are honored and humbled to be a part of the WKA track spotlight. G & J Kartway is our home and we couldn't be more blessed having the best track owners in the country, The Gregg family along with our many sponsors. OVKA maintains a website along with a Facebook page. Please look us up for any information including contact numbers for both of us and the entire Board of Directors. An opportunity to see what OVKA is about is coming up the weekend of July 4th - 5th. This is a 2 day race event with qualifying Saturday and racing on Sunday. OVKA Memorial Championship race weekend includes trophies, catered grill out, skydivers, corn-hole tournaments, bike races, give-a-ways and activities for all age groups. We look forward to the start of the race season and welcome all of you to come and race with us.