WKA Plans to Return to Charlotte Motor Speedway in April

When the World Karting Association Manufacturers Cup program announced their 2020 schedule, the date set for April 17-19 was slated to be in Charlotte, North Carolina. While the planned facility and layout was a temporary circuit in the Concord area, WKA officials have confirmed the anticipated return to Charlotte Motor Speedway. Featuring a multi-configuration design including a similar challenging layout that brought world-class drivers to the North American Karting Championships in 1995, the karting track inside the iconic Speedway is anticipated to have a complete facelift from the ground up, including widening to thirty six feet at the narrowest point, prior to the Manufacturers Cup weekend in April.

“The staff at Charlotte Motor Speedway is committed to have the upper echelon of North American kart racers return to their facility as construction has already begun,” explained WKA President Kevin Williams. “The Charlotte kart track was the home for great racing and exciting wheel-to-wheel action but over time, the circuit deteriorated. With a plan to restore not only the race surface, but everything that goes into the preservation of that surface for years to come, we are pleased to announce that our second Manufacturers Cup event of the year will take place inside the Charlotte Motor Speedway and will be the first competitive event on the newly repaved surface.”

It is no secret that Charlotte Motor Speedway wanted to return to the national level karting scene. While teams can utilize both tented pit spaces and rent the NASCAR garages, the facility brings excitement to the sport. 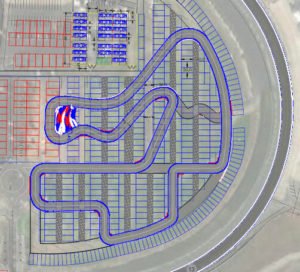 Williams continued, “I wouldn’t be surprised if several racers from the past come out of the woodwork to compete inside the confines of Charlotte Motor Speedway for old times’ sake. I think there are several past race winners and champions that would enjoy the smoother pavement rather than the bumps and curbing which made the track one of the toughest in all of karting. The restoration project brings some added pressure for us to perform as a series but also a great deal of excitement as we head to the second event of the season.”

Before returning to the Charlotte Motor Speedway, the WKA program will travel south to the Orlando Kart Center for the final event in the WKA Florida Winter Cup and the first round of the WKA Mid-Season Shootout. With WKA Florida Winter Cup Championships on the line that include ROK the RIO prize packages, the Orlando event will be the first round of the Mid-Season Shootout which features ROK Cup Superfinal tickets as well as ROK the RIO invites. Please see prize package information below.

All class champions and podium finishers of the WKA Florida Winter Cup, which is the combined points totals for each class from the Daytona (December 2019) and Orlando (February 2020), events will receive the following:

The competitors gaining the most cumulative points in Mini ROK, Junior ROK, Senior ROK and ROK Shifter after the Orlando, Florida, Charlotte, North Carolina and New Castle, Indiana Mid-Season Shootout will receive an invitation to the 2020 ROK Cup Superfinal

*Classes must average more than 10 entries